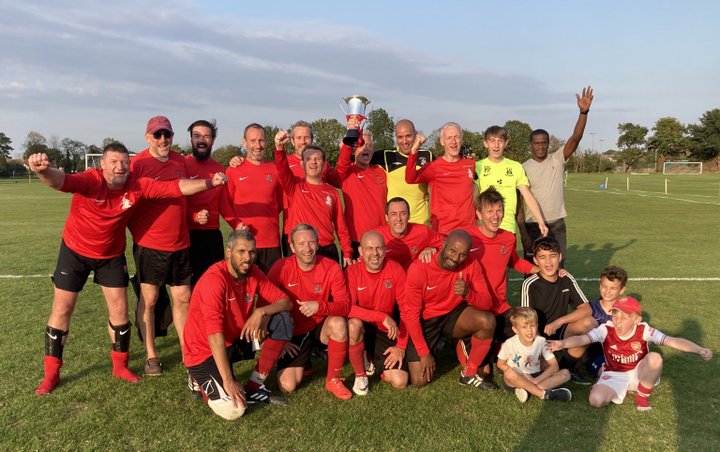 Congratulations to Polytechnic who were the inaugural winners of the West London Veterans Football League, league cup last Saturday when they defeated Nottsborough 5-4 on penalties.

Poly set the early pace and after 20 minutes of virtually one-way traffic, took a deserved 1-0 lead which they held until half time. After the restart, Nottsborough started to come into the game more and were rewarded with an equaliser on 60mins. As the contest became more open in the last quarter, both sides had opportunities to win, but in the end the refs whistle bought a welcome drink break before 30 minutes of extra time. As the sun continued to shine, both teams started to resemble a couple of heavy weights as the game flowed (albeit at a more sedated pace) from end to end but still the deadlock could not be broken.

And so, to the dreaded penalty shootout!

After both teams missed their opening strikes, it was the Poly keeper who immerged the hero saving the first shot in sudden death. A fitting result in the end as the new competition has been renamed after former league chairman and Poly player Terry Buckland who sadly passed away earlier in the year.

Good luck to all our teams in the first round of this seasons competition which begins on the 3rd October and also to Nottsborough who fly the WLVFL flag in a couple of weeks when they take on West Wickham in the final of the AFA Vets cup.